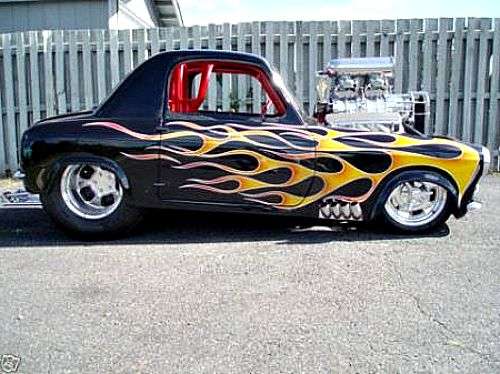 An Automotive Arsonist who torched more than 100 cars in Berlin, a campaign many thought was the work of political extremists, was arrested by police yesterday. The unnamed 27-year-old was moved to violence by the same rage and frustration motivating Occupy Wall Street and related protests globally, though in this case the protest was personal and childishly pursued to a criminal extent.
Advertisement

Joblessness, debt and the dissolution of hope led him to light 67 luxury cars afire during a three-month period this year. Apparently the first 20 or so did little to soothe his rage and frustration. To our way of thinking, the only time cars and flame should be associated is when applied as a custom graphic, like in the photo below of a hot rod for sale on HotRod.com.

The Automotive Arsonist targeted mostly vehicles manufactured by Audi, BMW and Mercedes, but the flames spread, igniting 35 additional cars that just happened to be nearby. Almost nightly for 12 weeks the fires were set with slow-burning liquid charcoal lighting fluid, baffling police and making them appear inept during a major mayoral election.

"This is a sensational triumph," said Berlin state crime office (LKA) director Christian Steiof in a posting by Erik Kirschbaum on the Reuters site.

Another police official told the media the man confessed to setting 67 cars on fire since June in Germany's poorest big city. "He wasn't motivated by politics, but rather by social envy," said Oliver Stepien, a senior police official. "He said in essence: I've got debts, my life stinks and others with fancy cars are better off and they deserve this."

Automotive arson suddenly spiked in Berlin this year, with up to a dozen vehicles set on fire on some nights. Police enlisted the aid of federal authorities for help, utilizing high-tech equipment and helicopters with thermal imaging.

Nearly 500 police were deployed nightly to look for suspects in addition to a special 150-person task force. Over 470 cars have been set on fire this year and police are still searching for the other perpetrators. They believe as many as a third were politically motivated.

"It might have been the case in 2009 that some people in Berlin had some understanding for the fire attacks as some sort of protest," Berlin's Interior Minister Ehrhart Koerting told Reuters recently. "But I don't think anyone has that anymore."

Automotive arson is not unknown in the U.S., but it usually the act of burglars or vandals, while in the Canadian city of Vancouver it’s a cyclic event coinciding with losses during the Stanley Cup finals by the Canucks hockey team. It is unclear whether disgruntled fans ignite whatever car is handy or look for plates from neighboring provinces or states.

Many of us can admit to a certain envy of those driving high-end luxury automobiles, but setting them afire crosses a great many lines that should give one pause. Few of us can say we have never had a violent thought – that’s only human – but acting on those thoughts is just plain criminal.