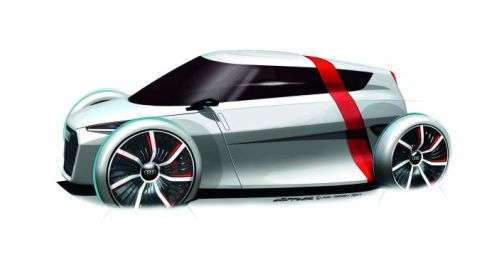 An amazing amount of innovation is happening in the automotive field and Audi's radically new, lightweight, two-seat, electric powered urban concept car is right there at the forefront, coming to the 2011 Frankfurt Motor Show.
Advertisement

Boldly venturing into the unknown realm of future mobility, Audi’s urban concept car is an unprecedented departure from convention. “The Audi urban concept is not based on any previous model,” the company’s press release states. “Its development is solely oriented on the strict principles of lightweight construction, efficiency and reduction.”

Simply looking at the urban concept car suggests quickness and agility on a level approaching that of two-wheeled vehicles in an exuberantly enclosed, two-seat, four-wheeled car.

The top and side windows slide to the rear as a single unit to provide entry and exit to the vehicle. This feature alone might cause the Audi urban concept to become known as an Audi Top Slider on the street, with little or no apology to the Sperry shoe company.

The sleek, low-slung concept car has free-standing 21-inch wheels, with surrounding protective plates ringed in LED lights that are intermittently lit when moving. If you read the preceding sentence and thought, “Huh?” we’re right there with you. These “free-standing wheels” bear a closer look in Frankfurt.

Inside, the seating is staggered and the steering wheels and pedals can be adjusted to the driver’s arm and leg reach and length respectively. The controls and, in fact, everything about the Audi urban concept car is “subject to the dictates of ultra-lightweight construction.”

The Audi urban concept is powered by two e-tron electric motors coupled to a lithium-ion battery. Audi alludes to but does not elaborate upon its complex suspension. Nevertheless, the implied weight to power equation promises a vehicle, which will have quickly fled while many of us are still just thinking about leaving.

Finally, this breathtakingly innovative urban concept car looks very low to the ground with what would appear to be a three-inch ground clearance, implying it is meant to roll on roads as yet nonexistent in most of the world.

It might also prove difficult to get in and out of for some drivers, but let’s face it. The Audi urban concept car is aimed at a young, confident and adventurous driver – and when and if it hits the streets some years down the road, it will no doubt find quite a few.