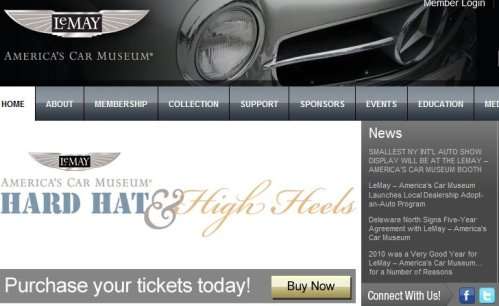 Despite beginning construction in the dire economic conditions of June 2010, the primarily philanthropically funded American Car Museum (ACM) is three-quarters completed and on track for a grand opening May 19, 2012. On a nine-acre campus, the institution will preserve and reveal the romantic and recurring rendezvous between America and the automobile.
Advertisement

“We’ve managed to build a museum during difficult economic times when nearly everybody said it couldn't be done," said ACM President and CEO David Madeira, who has been at the museum's helm since 2002. "I'm proud to say we are creating 'a destination' in addition to a museum, which we project to annually attract 425,000 visitors and result in $34 million for the local economy."

The complex will include a show field to host everything from vintage car events to rock concerts and drive-in movies. Of course, there’ll be a gift shop, banquet center and cafe, a library and rotating exhibits featuring cars, music, film and photos for displays such as "game-changing automotive inventions."

"America's love affair with the automobile is the centerpiece of our museum," he added. "Everybody remembers their first car, family driving vacations, a sports car they fell in love with as a teenager. Personal experiences with cars are part of life in America, and with assistance from the Harold and Nancy LeMay family collection, we'll spotlight more than a century of automotive history."

Harold LeMay returned from the Navy during WWII to begin a business hauling workers to and from factories in trucks. Noticing trash piling up around some businesses, he quickly found himself in the business of refuse removal.

Spanaway Garbage began in 1942 with a single employee. In 1963, LeMay married Nancy and working side by side with a personal motto stating "one way or another, the job gets done," they built the business up to over 500 employees.

Over the years Harold began collecting cars. This continued until the collection included many of the most exquisite and antique brands, such as Duisenberg, Rolls Royce, Packard, Cadillac, Chevy and Ford. It spans the complete history of the automobile, from the horseless carriage to the grand touring cars of the Roaring ‘20s and Depressed ‘30s to the muscle cars of the ‘60s as well as irreplaceable, one-of-kind autos.

Before Harold’s death, he and Nancy founded the LeMay Museum, now known as America’s Car Museum. "Harold wanted people to know the history of these great cars and wanted them open to public," said Nancy. "He really wanted to share his love of these cars with others."

ACM will have 15 galleries housing up to 500 individual display items each. Cars, trucks and motorcycles from private owners, corporations and the LeMay collection, which amassed a total of more than 3,500 vehicles in the'90s. It was an entry in the Guinness Book of World Records. "Harold never met a car he didn't like," Nancy said of her late husband.

The museum plans to eventually move beyond an exclusive American focus and include vehicles from Europe as well.

"ACM is designed to preserve history and thrive at the heart of the world's automotive culture," Madeira said. "We'll have a fun, ever-changing environment with rotating exhibits, our 3.5-acre show field will host events and visitors from around the globe, and we will establish a destination that breaks the mold for traditional car museums."