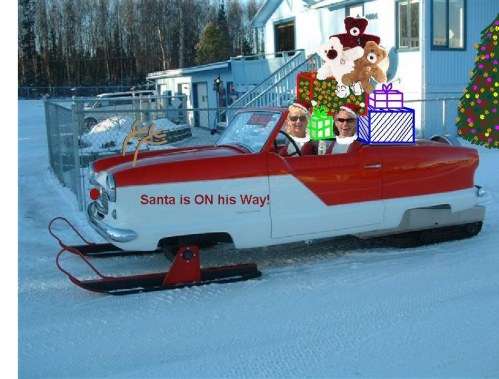 When you get a Christmas season email from a fellow hot rodder, I suppose you have to be prepared for almost anything. Fact is, I was not too surprised when I saw my friend Glenn and his lady friend Karen inside some custom contraption. The first thing I thought was, what did he build now?
Advertisement

You have to understand the humor of hot rod types, though. Anything and everything revolves around cars. So, my first glance at the pic in my email pop-up was, hey, it’s Glenn in a what? Until I looked at the photo enlarged, I wasn’t so sure.

For the record, Glenn has probably built, owned and traded more cars in a year than I have ever owned. Despite the cold Michigan weather, he will ride his hot rods and or Harley.

I remember him driving his almost-a-funny car looking Chevelle with open headers from the Saturn building in Troy to his home. Likewise, he drove home in his Corvette after breaking his leg at the knee from a bad slide into third by another baseball player.

Of course this email pic is doctored, and obviously not to studio standards; but, as the commercial says, I digress. I guess the car in the pic reminds me of an old Nash or one of those amphibian cars.

Truth is, I’m into car tech, but often miss the identification if it’s older than 1957, unless it’s a Mopar, Chevy or a Ford. I often have to call Glenn or my other friend Ray for confirmation.

When it comes to tech, though, they usually call me.

Well, let’s take Glenn and Karen out of the pic for a moment, and then it hits you. Somebody really did build this thing or they’re really good at Photoshop. Regardless, I'm sure any Santa Claus would think it was cool.

And to set the record straight, Glenn owns and operates Weather's Transport in a suburb of Detroit, Michigan, from where he transports custom cars and bikes across the country.

And special thanks to Glenn and Karen for allowing me to share!