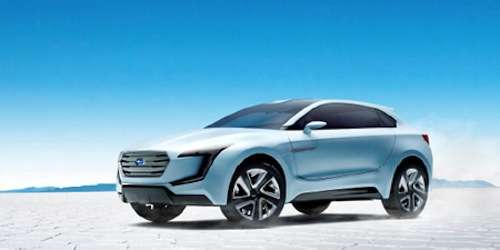 When Subaru unveils the new VIZIV Concept in Geneva, it will reveal their new Diesel hybrid system and radical new AWD system that reveals the future direction of the brand.
Advertisement

The new Subaru VIZIV Concept that is making its debut in Geneva is much more than just a concept car. The VIZIV Concept is revealing two things that give us a good idea of the future direction of the brand. It represents the new design language and technologies that will take the Subaru brand into the future. The “VIZIV” model name is a coined word inspired by the phrase “Vision for Innovation”. And the future-generation crossover concept, embodying the brand value of “Enjoyment and Peace of Mind”, brings innovation that reveals much about what lies ahead for Subaru. What can we learn from the new Subaru VIZIV Concept?

One big difference is the exterior has been created with a new Subaru design philosophy that is a radical departure from the past. The new VIZIV Concept is a stylish two-door, four-seat sporty crossover that is designed to enable four adults to ride comfortably even on long road trips. Subaru may have taken a page right from Land Rover and the popular new 2013 Range Rover Evoque with its rakish design and two-door four-seat capability. Look for future Subaru’s to look very different.

But the biggest news, is this new crossover will feature something soon to be offered by Subaru. It will be powered by a new hybrid Boxer diesel that has never been seen before now. The rear wheels will be 100% motor-driven eliminating the need for a propeller shaft, creating a lower floor that offers ample legroom for rear seat occupants despite its compact size. The unique design will allow the crossover to feature the stylish two-door design and still have room for a rear seat and four passenger seating.

Subaru diesel power in the U.S.?

The Subaru Boxer diesel is not new, and has been extensively used around the globe and is a very efficient engine. Buyers have been asking Subaru to bring a diesel variant to U.S. shores for years. Could this be the technology that finally brings a Subaru diesel to North America? We already know Subaru has said they will offer their first hybrid vehicle this year.

But Subaru has developed a new hybrid system that will be coupled with the efficient diesel. The hybrid diesel powertrain is a plug-in hybrid system that combines a 2.0-liter Subaru Boxer diesel engine and the new high-torque-compatible Lineartronic (CVT) with a front motor that provides both vehicle drive and power generation, and two independent rear motors for vehicle drive only. Lithium-ion batteries will power the two motors.

Because the new powertrain system selects the best time to use each power unit, the hybrid system should be very fuel-efficient. The motors start and drive the vehicle during low-speed or city driving, while the diesel engine and high-efficiency Lineartronic take over on the highway. The new system incorporates a "Hybrid SI-DRIVE" system with an "Eco-Cruise", "Intelligent" and "Sports" modes that provide coordinated control in conjunction with the new Subaru "EyeSight" driving assistance system.

Subaru says the engine and motor power are subjected to “fine-tuned control” depending on road conditions captured and detected by the EyeSight's stereo camera, creating an intelligent driving feature designed for safety and eco- friendliness.

Another big leap forward for Subaru will be their new "Independent-rear-motor-driven symmetrical AWD" system which will lead the way to a future generation of Subaru AWD technology. This new-generation system features the two motors exclusively developed for the rear wheel drive control. The rear right and left drive will power independently. Coordinated management system of the front and rear motor controls the division of drive power between the front and rear wheels.

How far away is the new Subaru VIZIV Concept Hybrid AWD technology from becoming reality? And could the U.S. finally see the first diesel Subaru? It could be a lot sooner than we think. Fuji Heavy Industries Ltd. (FHI) has a history of developing new technology and bringing it to the market quickly.

RevCharles wrote on March 5, 2013 - 9:03am Permalink
I LOVE YOU, Subaru Boxer, Turbo Diesel!!! <3 Please come to the Philippines before I die!!! I am now 69 years old and have added driving a Subaru Boxer Turbo Diesel to my "bucket list."