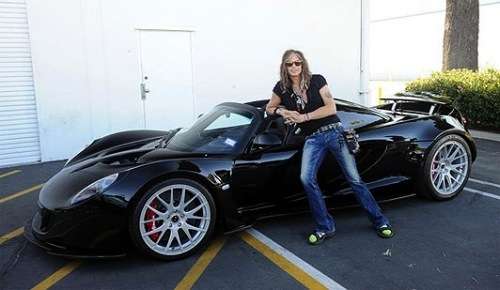 Steven Tyler’s Venom GT Spyder will make its debut at Pebble Beach for all the world to see.
Advertisement

Steven Tyler’s Venom GT Spyder is set to make its debut at the Pebble Beach Concours on August 19th, 2012. The car was built for the Aerosmith frontman by Hennessey Performance in Sealy, Texas. Hennessey builds custom cars out of two locations, one near Houston, Texas and a new facility in Lake Forest, California. When Tyler called John Hennessey and asked him to build him “something special”, Hennessey knew exactly what would make the American Idol judge happy. He designed and built a custom Venom GT Spyder.

The custom Venom GT Spyder has already been delivered to Tyler, but this will be the first debut for the public to see the 1200 horsepower supercar. Tyler who is know as the “Demon of Screamin” due to his high screams and wide vocal range as he performs on the stage, definitely has something to scream about when he gets behind the wheel of his new toy.

Hennessey says the custom Venom GT Spyder has been tested up to 260 mph. The supercar will sprint from 0-60 mph in an incredible 2.5 seconds, and 0-200 in 15.3 seconds. Tyler’s Hennessey outfitted Venom GT Spyder cost him a cool $1.1 million. But Tyler told John Hennessey that he wanted a car that would entertain him and money was no object.

Hennessey took a Lotus Elise/Exige chassis and modified it with a General Motors 6.2 liter twin-tubocharged sequential Multi-Port Electronic Fuel InjectionV-8 engine that is also found in the Chevy Corvette ZR1. Tyler can adjust the horsepower with 3 settings: 800 hp, 1,000 hp & 1,200 hp. The 2,685 lb. car uses a Ricardo six-speed manual transmission to transfer all that power to the rear wheels.

If you are going to attend the event, Steven Tyler’s Venom GT Spyder can be seen in front of the Lodge on the concept car green.