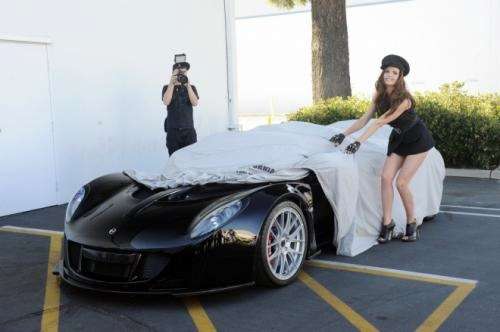 When Steven Tyler took delivery of his new Venom GT Spyder from Hennessey, it was more than a surprise who made the delivery.
Advertisement

When Steven Tyler took delivery of his new Venom GT Spyder that was built back in May, Hennessey Perfromance, didn’t release all the details until now. Tyler of Aerosmith fame and one of the judges on American Idol was greeted by Latvian supermodel Julia Lescova who pulled the cover off the supercar in the parking lot at Siren Studios in Hollywood.

Julia, a sexy blue-eyed brunette from LA Models who was the 2011 face of Guess’s clothing line, was every bit as sexy as the new Venom GT Spyder. In the video below, Lascova who was a professional ball dancer for seven years, is seen “working it” as Tyler sings “It Fells So Good” in the background. It looks like Hennessey Performance is getting every bit of mileage they can out the famous singers supercar and just released the video showing Tyler as he takes delivery. The LA Model was not shown in previous shots when Tyler picked up the car back in May.

Since then Tyler’s car has been dyno tested, and made it’s world debut at Pebble Beach on August 19th last year for all the world to see. The custom Venom GT Spyder has been tested up to 260 mph and will sprint from 0-60 mph in an incredible 2.5 seconds, and 0-200 in 15.3 seconds. Tyler’s Hennessey outfitted Venom GT Spyder cost him a cool $1.1 million. But Tyler told John Hennessey that he wanted a car that would entertain him and money was no object. And John Hennessey delivered in a big way to his famous client.

Hennessey took a Lotus Elise/Exige chassis and modified it with a General Motors 6.2 liter twin-tubocharged sequential Multi-Port Electronic Fuel InjectionV-8 engine that is also found in the Chevy Corvette ZR1. Tyler can adjust the horsepower with 3 settings: 800 hp, 1,000 hp & 1,200 hp. The 2,685 lb. car uses a Ricardo six-speed manual transmission to transfer all that power to the rear wheels.

When Steven Tyler walked up to take delivery he walked up and said, “Holy Mackerel!” We’re not sure if he was talking about the his new Venom GT Spyder or Julia Lescova.

Three Deuce wrote on January 5, 2013 - 6:07pm Permalink
Not an ounce of imperfection in that body... Julia's Proper transformation by Hennessy of the Exige into a super car.