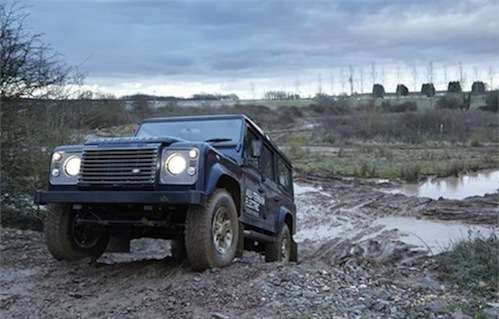 Land Rover Defender Electric: The Nissan LEAF can’t do this!

Land Rover is rolling out some competition for the Nissan Leaf and will unveil a new Electric Defender with zero emissions but adds something the LEAF will never do; extreme all-terrain capability.
Advertisement

Even though the Nissan LEAF has sold over 50,000 units around the globe, it will never be able to do what Land Rover has planned for its all-electric SUV. Land Rover has announced that the Defender will unveil seven new Electric Defender models at the Geneva Motor Show this year. The research vehicle delivers zero emissions like the LEAF, but it does something the Nissan electric will never be able to do. The Defender Electric will also deliver its tough, go-anywhere capability.

The Defender Electric vehicles (EVs) retain the SUV’s legendary four-wheel drive system and differential lock, but the standard diesel engine and gearbox have been replaced by a 70kW (94bhp), 330Nm electric motor mated to a 300-volt, lithium-ion battery. The off-road warrior will have a range of more than 50 miles. Bu that chould be enough to get stuck in the backcountry with no power left. Land Rover says in typical, low speed off-road use, it can last for up to eight hours before recharging.

Land Rover has always been on the forefront when it comes to innovation and the Defender Electric is on the cutting edge of technology. "Investing in innovation has always been the lifeblood of our business and our engineering teams are working hard to develop innovative new technology to provide sustainable motoring solutions," said John Edwards, Land Rover Global Brand Director.

The Nissan LEAF doesn’t have anything on Land Rover when it comes to being green. Land Rover has a 'Tread Lightly' philosophy when it comes to the earth and the smooth, low-speed capability of the electric drivetrain makes the Electric Defenders especially well suited to climbing obstacles without damaging the planet unnecessarily.

Will travel where no other EV will go

The vehicles' capability was tested in extreme and environmentally sensitive conditions, demonstrating capabilities not shared by conventional road-going EVs like the Nissan LEAF. Trials included pulling a 12-ton 'road train' up a 13 percent gradient and wading to a depth of 800mm. Can the Nissan LEAF wade a raging river and come out the other side? Land Rover will be the first automaker to have an EV that will be able to handle the most arduous all-terrain conditions.

Look for a Land Rover EV in the future

Even though the Defender Electric isn’t expected to reach production, the seven EVs will go into service in special applications later this year. "It gives us a chance to evolve and test some of the technologies that may one day be introduced into future Land Rover models," said Antony Harper, Jaguar Land Rover Head of Research.

Sales of the all-electric Nissan LEAF increased 36.6 percent to 653 units in spite of tight supplies and the current rollout of the 2013 LEAF now being built in Smyrna, Tenn. Maybe it’s time for Nissan to come up with an all-electric Pathfinder that will keep up with the new Land Rover Defender Electric.

Anonymous wrote on March 3, 2013 - 12:59am Permalink
70kwh, huh? That's less than a Leaf. Land Rover is obviously just playing with a few vehicles for fun. Anyone serious about making an off-road EV would use at least twice this mated with 50-100kwh battery.
Aaron Turpen wrote on March 3, 2013 - 2:52pm Permalink
Actually, given the uses, 94 horsepower is plenty. It's all in the size:muscle ratio and the Defender is a small machine. The current Defender hard-top only has 122 horsepower and a GVW of just 2,400 pounds. 94 horsepower with 100% torque from 0 beats 122 in a 3,00+ rpm range anytime. The battery, I think, is going to be the problem. They should definitely add 25% or more to its size, but are probably playing a weight:power game there as well.
Aaron Turpen wrote on March 3, 2013 - 2:56pm Permalink
Also, by the way, while the Leaf has a higher horsepower/kW motor, its motor puts out lower torque. In the Leaf, the choice was made to extend battery life. The Leaf is 280Nm while this Defender Electric is 330Nm. In offroad, torque is where it's all at.
Rob wrote on March 3, 2013 - 1:10am Permalink
There could be a captive market for these vehicles with wilderness tours and safaris, particularly where quiet running is vital like bird watching tours etc. The running costs would be hugely reduced, range would be a non issue because they have routes with known distances, the quiet running would significantly improve the customer experience allowing tour guides to converse more easily and convoys to quietly approach wildlife. They can certainly market their tours as being much lower impact and being totally tailpipe free may even be able to get access to areas off limits to other vehicles.
JP White wrote on March 3, 2013 - 7:37am Permalink
I agree the electric SUV is very appealing. The crossover Rav4 EV is already on sale in some select markets as a compliance vehicle. Sales of the Outlander PHEV have gone well in the first week of sales in Japan, coming to the US next year. So why compare a Land Rover to a LEAF. Very different vehicles for very different use cases? 50,000 LEAF's 1,000 Outlanders 7 (maybe) defenders Compare the Defender to the regular gasoline defender, I'm sure it can do things the gasoline version can't, or compare to the Rav4. Comparing to the LEAF is kinda weird.
Aaron Turpen wrote on March 3, 2013 - 3:00pm Permalink
Comparing to the Leaf makes sense when you consider who this is being written for. This is an article written for mainstream, everyday readers, not "EV nuts" or "EVangelists." The Leaf is the only battery-electric car that Joe America has likely ever seen. The RAV4 EV is only sold in California (and in extremely limited numbers) and the Outlander doesn't sell well in even its gasoline version, so I doubt the EV will do well either. This is why the Leaf and the Volt are so often compared - even by their respective makers. It's the closest thing they can use that consumers at large will be aware of.
Denis Flierl wrote on March 3, 2013 - 3:08pm Permalink
Hi JP! Thanks for your reply. It was never intended to be a true comparison with the LEAF, but a fun article about what's possible with EV's. Thanks for reading!