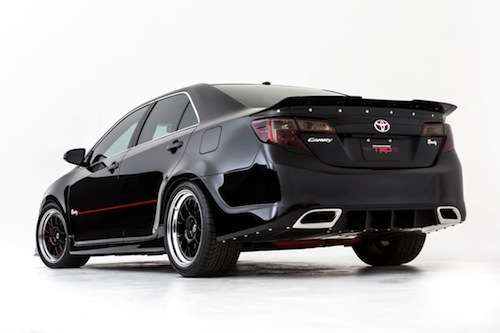 Kyle Busch took a 2012 Toyota Camry SE and remade it into the ‘Rowdy Edition’ Camry for the Toyota Racing Dream Build Challenge.
Advertisement

Kyle Busch has taken his “win or go home” racing philosophy and infused it into a 2012 Toyota Camry SE named the “Rowdy Edition” Camry after his “Rowdy” handle on the NASCAR racing circuit. The car was designed by Busch to compete in a very different race from what he is used to on the NASCAR circuit. This race will pit Busch and three other racing stand-outs against each other in a vehicle-modification build competition sponsored by Toyota. It’s called the Toyota Racing Dream Build Challenge.

Kyle Busch has been a captivating figure in stock car racing since 2001,when at the age of 16, he started his racing career. Since then, he has 104 career wins and is one of NASCAR’s top drivers. He is now hoping to head to the winners circle again, this time in his custom built 2012 Toyota Camry SE “Rowdy Edition” dream build car. Toyota says the Rowdy Edition Camry “is all about style and substance.” And Busch had much to do with the modifications to the stock Camry.

Under Busch’s supervision, the modifications were made to the Camry SE at Detroit Speed & Engineering (DSE) in Mooresville, N.C. The body modifications made to the “Rowdy’” Camry SE were a hand-formed, custom wide-body kit; custom front and rear belly pans; DSE-designed and fabricated front air splitter and rear air diffuser; and a custom, true dual exhaust system.

The goal of the build was to take the stock Camry and give it the look of a car that would run at Daytona, but still have the function of a car anyone would drive on the street. And since Busch’s NASCAR colors are black, red and white, the “Rowdy” Camry SE gets the same colors on the exterior and interior. On the inside the color scheme continues with the instillation of black and red leather Lexus IS F bucket seats to complete the custom look.

“Our approach to the build was to make a car with the stance, attitude and handling of a road-race car while retaining the functionality of a production Camry,” Busch said. He went on to say, “This looks like something we should run at Daytona and Talladega,”

The three other racing stand-outs that are competeing against Kyle Busch are NASCAR driver Clint Bowyer who built a Tekked-Out Prius, NHRA Funny Car driver Alexis DeJoria converted a Tundra pickup truck into a beastly desert pre-runner, and NHRA Top Fuel points leader Antron Brown modified a Sequoia for maximum speed. The winner gets bragging rights and a $50,000 check from Toyota to the driver’s chosen charity. If Busch wins the challenge, he has designated the money to benefit the Kyle Busch Foundation, whose mission is to empower young men and women by fostering life experiences and helping them achieve their goals.

Fans can vote once a day for their favorite car beginning on Oct. 20 and will continue through Oct. 29. They can vote on the Toyota Racing Facebook page where they can also enter to win prizes, and one fan will win a Toyota Racing “Dream Trip.” Kyle Busch’s "Rowdy Edition" Camry will make its premiere, along with its competitors at Toyota's press conference at the SEMA show in Las Vegas on Oct. 30 at 11 a.m.