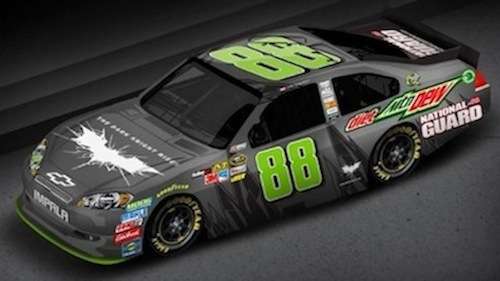 Mountain Dew is teaming up with Warner Bros. Pictures and Dale Earnhardt Jr. to promote the new movie “The Dark Knight Rises.”
Advertisement

Dale Earnhardt Jr.’s number 88 will have a new look when it hits the track in Michigan. Earnhardt Jr.’s sponsor Mountain Dew, is partnering with Warner Bros. Pictures and Legendary Pictures to promote the movie “The Dark Knight Rises.” The third and final installment in the Dark Knight trilogy opens in theaters July 20. Earnhardt’s No. 88 Chevrolet will carry a special Dark Knight paint scheme and fans will have a chance to vote on which color scheme and logo the car will get.

Each paint scheme captures a different element featured in the film. Fans can vote at DewCrew.com through May 22 12 pm EST. The winning design will be unveiled at the Hendrick Motorsports Fan Fest on Friday May 25. Earnhardt will also be wearing a custom Dark Knight firesuit at the Michigan race track on June 15th.

"I've always been a big fan of the Batman movies, so having a special The Dark Knight Rises-inspired paint scheme on my car is pretty cool for me," Earnhardt said. "I had some creative input on one of the designs, but no matter which one the fans select, it's going to look pretty awesome flying around the track at Michigan."

The new promotion marks the official kick-off to Mountain Dew’s interactive The Dark Knight Rises campaign by giving fans the power to determine which of four “Dark Knight”-inspired paint schematics will be used on Earnhardt's No. 88 Chevrolet. Each paint scheme choice captures a different element featured in the third and final installment of Christopher Nolan’s Batman trilogy.

"Dale Earnhardt Jr. is kicking off our new DEW The Dark Knight Rises campaign with some serious momentum," said Brett O'Brien, Vice President of Marketing for Mountain Dew "DEW, Earnhardt Jr. and 'The Dark Knight' fans are collectively the most passionate and vocal consumers out there, and we're excited to get them in on the action from the beginning."

NASCAR's most popular driver, Dale Earnhardt Jr. is a savvy businessman as well as a good driver. Though he leaves the day-to-day management of the team to older sister Kelley, Earnhardt stays as much connected to the business side now as when he began fielding Nationwide cars in 2005. When PepsiCo approached JRM with The Dark Night promotion, the deal was another example of Earnhardt’s willingness to leverage his clout to bring in more advertising dollars.

For more information on Mountain Dew and The Dark Knight Rises promotion, visit facebook.com/mountaindew or follow @mtn_dew on Twitter.