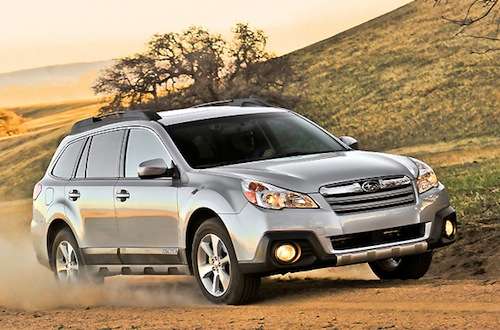 The 2013 Subaru Forester has won two Kiplinger awards along with the 2013 Outback, BRZ, Impreza and Legacy who take home awards in six areas.
Advertisement

The Subaru brand has created a unique niche in the marketplace and features some of the highest quality, safest and most highly functional cars on the planet. The 2013 Forester along with the 2013 Outback, BRZ, Impreza and Legacy are being recognized for that uniqueness and have taken home six awards from Kiplinger’s Personal Finance. The popular 2013 Forester has received two of the six awards for “Best Resale” and “Worth a Look” recognition for small crossovers.

2013 Forester comes away with two awards

Kiplinger’s evaluated 2013 models by price and category and ranked them for value, price, performance roominess, driving impressions and safety. The magazine names top models in ten categories, including picks for Best in Class and Best New Models. Kiplinger’s also highlights five additional vehicles in each category as Worth a Look, indicating the Forester scored high enough to be in contention for the top awards.

Winners are selected in 12 categories

Kiplinger’s Personal Finance sorted through hundreds of vehicles to reveal the 22 vehicles honored in the March 2013 Kiplinger’s annual buyer’s guide, which provides consumers with advice on how to find value and quality when they go car shopping. Winners are selected in 12 categories and the two standouts in each category; Best in Class and Best New Model.

The 2013 Outback gets top honors

The 2013 Subaru Outback takes away top honors and was named “Best in Class” in the wagons category. The 2013 Outback is powered by a new, more efficient powertrain and debuting the new EyeSight driver-assist system and revised styling. Chassis enhancements improve both ride quality and agility in the 2013 Outback, which also offers new amenities and audio/infotainment capabilities. The Outback is popular around the globe.

The Subaru Outback isn’t new to the Kiplinger awards. The crossover wagon has earned a place in Kiplinger’s rankings every year since its 2010 redesign. According to Kiplingers, the Outback “blends surefooted handling, oodles of interior space and off-roading cred with plenty of power.” The 2013 Outback was also named a Top Safety Pick + by the Insurance Institute for Highway Safety.

The all-new 2013 Subaru BRZ wins “Most Fuel-Efficient” award in the sports car category. The BRZ has been wildly popular around the globe and features Subaru’s new naturally aspirated 200 horsepower horizontally opposed Boxer engine design. The two-door rear-drive BRZ is a fun sports car that doesn’t sacrifice everyday comfort and practicality. It gets an estimated 34-mpg highway fuel economy when coupled with the six-speed automatic transmission.