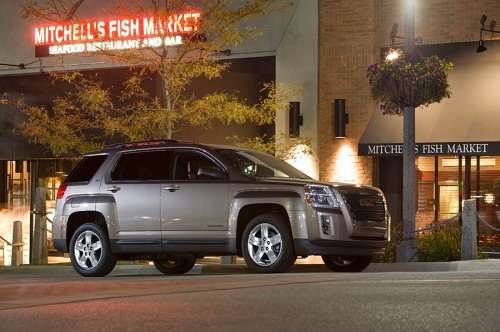 Many brands build their marketing position on a tough off-road look and capabilities that are absolutely absurd. GM's Terrain recently got a workout in Colorado and it proves AWD is really all anyone needs.
Advertisement

Some folks just like to look rugged. They buy flat bottom rubberized climbing shoes and wear them around the city even though just about anything else would be more comfortable. Some buy clothes from famous hunting catalog stores in Maine so they can dash from their SUV to the suburban Commuter Rail in winter without the possibility of being chilly for 2 minutes. These are pretty affordable affectations. Sadly, many automobile buyers exhibit the same behavior. They have to buy a huge, top-heavy four-wheel drive truck or $60,000 SUV because they go skiing “up north” twice each winter. Or they own a small boat they need to tow back and forth from their yard to the marina 10 or 12 times per summer. Even more sad are the owners of “trail-rated Rubicon–tested” rock hoppers that make the slog in highway traffic every day of their ownership. GM issued a recent press release that highlights just how ridiculous America’s rugged outdoorsman styling has become.

Fire Lines and Mountain Trails
Over the past summer Colorado and Wyoming endured wildfires that required a lot of hard working people be in the woods and mountains off road. GM leant a GMC Terrain (4-cylinder) to a disaster relief volunteer named Dave Fagan. Mr. Fagan put 3,500 miles on the vehicle driving not on roads, but rather on mountain trails and over fire lines created with bulldozers. Please glance at the picture of the 4-cylinder GMC Terrain at this point in the story. Is it what you expected, or were you expecting one of those Hummer-Jeep type thingies with enormous wheels, a winch on the front, and a spare tire strapped to the back tailgate? The vehicle that Mr. Fagan used during this period is very similar to a Honda CR-V or Subaru Forrester. Four-wheel drive is not offered on the Terrain or the CR-V, or the Forester. Rather, they are all basically front wheel drive vehicles that have the ability to shift torque to the rear wheels when it is needed. This is called All-Wheel Drive (AWD) To make the vehicle switch from front to AWD the driver has to do one very important thing. Nothing. The vehicles all do it completely on their own. And it works.

4-Wheel Drive compared with AWD
Without saying it bluntly because GM makes a LOT of trucks, Mr. Fagen said the following about driving alongside other trucky vehicles; “The Terrain really performed. When other vehicles seemed to have lost traction, the Terrain didn’t, and it had great maneuverability compared to what I saw from the vehicles I drove alongside. Plus, I was impressed by the fuel economy out there where there aren’t many gas stations.” Fuel economy can be complicated, like adding direct injection, cylinder deactivation, a complex turbo system, like many big trucks now do, or it can be simple. Just make the vehicle smaller, make the wheels for rolling rather than as jewelry, and lose all the ridiculous 4-wheel drive parts and lift kit iron. Small wheelbase, low center of gravity, light vehicles will always be more trail-worthy than lifted, heavy, gigantic tanks. Could an extreme off-road vehicle find a place it can go the Terrain couldn’t? Of course, or the two vehicles could simply drive around the obstacle.

Real Off-Roading Tools
Mr. Fagan’s reports also highlight some interesting facts about real off-roading. It isn’t all jumps and slamming through mud holes. Often times the only way out of a trail is in reverse because the trees get too close together. Hilariously, Mr. Fagan points to the rear camera as a key off-roading tool. Not huge knobby tires or a beefy looking “brush bar.” His report includes; “On some narrow trails, there was only one way in and out. With tight space to turn around, the camera was very helpful. The Terrain also handled my many chargers, which made it a great mobile office.” Another feature he used is the Hill Start Assist. The author has to admit he was skeptical of this until he actually needed to use it himself. How it works is this: You are forced to turn around on a steep hill with a loose surface, like softball size rocks, or sand. As you do the K turn, if the vehicle has time to roll as you shift from Drive to Reverse, or vice versa, the wheels tend to dig in and you can find yourself flat-bottomed (The road touching the bottom of the vehicle). GMs simple solution was to add a feature that just holds the brakes for a second and a half while the driver moves his foot from the brake to the gas. A very inexpensive, and actually useful, off-road feature available on many all-wheel drive vehicles.

Is there a place for true work trucks capable of towing a ship? Perhaps, but the truth is that most 4-wheel drive vehicles are less off-road capable than small cute-‘utes with AWD.