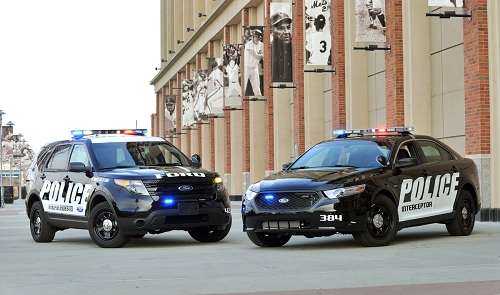 In the very important police fleet market the Blue Oval continues to win the nod from the boys in blue.
Advertisement

Ford, GM, and Fiat consider the police vehicle market critically important. Each offers vehicles for sale in the US and when a prospect turns into a buyer not one, but dozens of vehicles can be bought. Each manufacturer produces distinct model offerings that provide the buying committees what they need and want. Those things are often at odds within the committees. For example, fuel economy and cost of ownership may be the first two priorities for the municipalities doling out taxpayer funds, and safety and performance the first two priorities for the officer’s unions. Ford’s recent success at the Los Angeles County Sherriff’s Department performance tests shows that it knows how to provide what the buyers need and much of what they want as well.

Held in conjunction with the Los Angeles Police Department, the test’s highlight is a multi-lap performance test called “City Pursuit.” The test consists of 32 high speed laps run more or less back to back. The test is run at the Auto Club Speedway. 0-100 mile per hour runs, and other parameters are scored and Ford topped that particular category. The idea is to evaluate the tires, suspension, brakes and other components under hard, hot conditions to give an idea of durability and performance in the most sever conditions a police vehicle will see. During the test the new Ford Taurus with the 3.6 liter EcoBoost engine set a course record. Commenting on this, Bill Gubing, Police Interceptor chief engineer, said “Setting the all-time record on the city pursuit test is significant. However, the real engineering excellence is designing a portfolio of Police Interceptors for an industry that demands superior durability, braking power and handling." The normally aspirated (non-turbo) Ford Interceptor was second in the course. Sorry officers, looks like the regular six might be enough. Even more damaging to the EcoBoost’s chances at being chosen for the fleet was the fact that the normally aspirated car had the shortest overall stopping distances. The Ford Explorer based Interceptor was faster than the GM products, and also shorter stopping distances.

Keep in mind that initial cost, cost of ownership, cost of operation, and other factors weigh heavily on the buying decision scale, but Ford has shown it can bring the performance. Torque News’ own Nicolas Zart made a good point recently pointing out that 99% of the time police vehicles are not pursuit vehicles. In fact, much of the time they are rolling light bars and rest areas for officers at road construction details or are on low speed parking enforcement duty. Does the US really need its police vehicles to all be Mad Max style police interceptors? A visit to New York City will answer that question. The Police there use almost every rolling device known to man in their daily work including electric vehicles, bicycles, and small gas powered jitneys. And just as an aside, why does Fiat’s Chrysler Group get invited to our municipal fleet party now that the company is foreign owned?

In the race for fleet vehicle dominance Ford proves it has the performance to win the day, but does it have the whole package?

Elon Makes a Cybertruck Statement With an Action, But Quiet in Words
Tesla's Record Month in China: Doubled Registrations in March 2021
END_OF_DOCUMENT_TOKEN_TO_BE_REPLACED