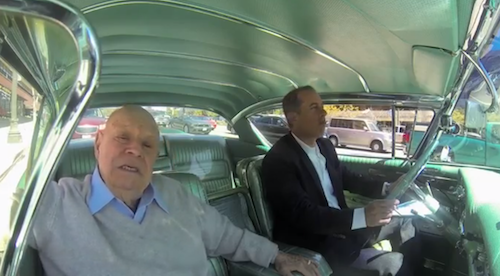 From veteran funnymen like Mel Brooks and Carl Reiner to current favorites like Ricky Gervais and Sarah Silverman – Jerry Seinfeld’s web series Comedians in Cars Getting Coffee has featured some of the funniest comedians of the past and present. Despite one and half seasons of hilarity, this week’s episode might be the best one yet.

Titled “You’ll Never Play the Copa,” this entertaining episode features the great Don Rickles telling stories ranging from water skiing with Frank Sinatra to impersonating former Los Angeles Dodgers manager Tommy Lasorda during an actual game. Rickles – who has been in the comedy business since 1948 – also tells of his amusing encounters with then-governor Ronald Reagan and evangelist Billy Graham.

Aside from celebrities, Rickles also discusses psychiatry – a field that he would have liked to attempt. Watch the full episode below for more amusing stories from the insult comic legend.

Although Rickles is great, what would an episode of CiCGC be without a memorable vehicle? Seinfeld seems to have the uncanny ability to match his guests with the perfect car each week, and the latest episode is no exception.

So what classic car personifies the likes of Don Rickles? A 1958 Cadillac Eldorado Seville in Gleneagles Green naturally. (With an interior covered in protective plastic to boot.) According to Seinfeld, the car is a “mobile version of Las Vegas,” which is only fitting for Rickles, who has been a headliner in Sin City since the early 1960s. Not to mention, Rickles also co-starred in Martin Scorsese’s 1995 film Casino, which was set in Las Vegas.

Considered a top-of-the-line Cadillac in 1958, this Eldorado Seville is equipped with a 335 horsepower V8 engine and can go from 0-60 mph in 10.7 seconds. Although that may seem like a long time, Seinfeld argues that it’s worth it, because you’ll want onlookers to see you driving this luxury car as long as possible. In the end, Seinfeld sums up the Eldorado Seville perfectly stating: “It’s a car that’s as thrilled with itself as you are.”

Stay tuned next for next week’s episode, which features Saturday Night Live’s Seth Myers and a Porsche Carrera RS. Click HERE to watch a preview. The next episode of CiCGC premieres on July 11 on Crackle.