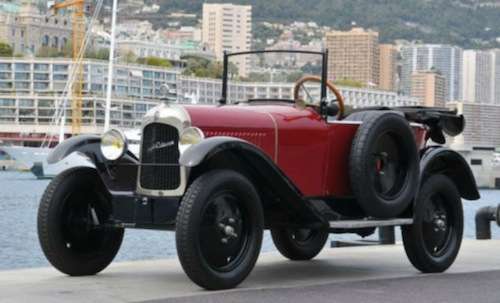 Prince of Monaco’s incredible classic car collection up for auction

Thirty-eight classic cars, once owned by Prince Rainier III of Monaco will soon be up for grabs.
Advertisement

Although he is perhaps best known for marrying American actress Grace Kelly, Prince Rainier of Monaco was also an avid car collector. Prince Rainier, who ruled the Principality of Monaco for nearly 56 years, amassed a car collection of over 100 cars up until his death in 2005. Now the ruler’s son, the sovereign Prince of Monaco, HSH Prince Albert has decided to place some of his father’s vehicles up for sales at an auction which will take place next month. Auction-goers will have the pleasure to bid on a total of 38 classic cars once owned by Prince Rainier. The auction, which contains classic cars and military vehicles, will be held at Museum Terrasses de Fontvielle in Monaco on July 26.

So what will be up for grabs next month? Well, a couple highlights include a rare 1925 Citroen Cabriolet 5HP and a 1913 Panhard X19. Other classic cars include various other models from Panhard, Mercedes, Bentley, Fiat, Ford, Dodge, Citroen, Renault and Peugeot. All cars come with a personal set of Monegasque papers held in the Prince of Monaco’s name. There is no reserve price for any vehicle.

"The Princes of Monaco have always been passionate about motor cars. Prince Pierre initiated the Grand Prix in 1929, and competed in it, in a Torpedo. My father, Prince Rainier, took over the development of the race, which has today become one of the most prestigious events in the world. He also supported the Historic Grand Prix, which was established in 1997 and has enjoyed enormous success."

Aside from being famous for his car collection and famous wife, Prince Rainier III of Monaco was also responsible for multiple reforms made to Monaco’s constitution. The constitutional amendments helped to expand Monaco’s economy beyond its gambling base, which had been its primary econonomic mover. Presently, gambling accounts for just three percent of the nation’s annual revenue, compared to 95 percent when Rainier took the throne. Rainier’s reforms also put an end to autocratic rule in Monaco, placing power with the prince and an eighteen member elected council. He was the world’s second longest-serving living head of state, prior to his passing in 2005.

Here is the full list of 38 vehicles with their prices: