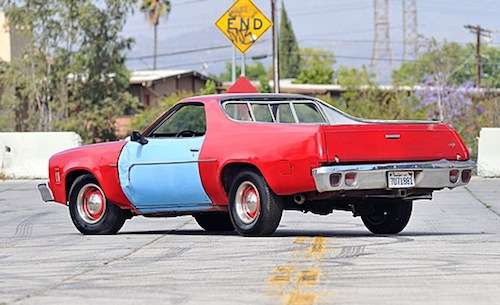 The memorable 1973 Chevrolet El Camino featured in the hit series My Name is Earl will be up for grabs this Saturday thanks to Mecum Auctions.
Advertisement

Jason Lee a.k.a. Earl Hickey may have been the star of My Name is Earl, but his car, a 1973 Chevrolet El Camino, was certainly a scene-stealer. The vehicle, which was featured in all four seasons of the NBC show, will be up for auction on Saturday, July 27, 2013 in Santa Monica, Calif. courtesy of Mecum Auctions — the world leader in live auctions of collector cars, classic cars, corvettes, hot rods, street rods and muscle cars.

“A TV star car that will generate smiles of recognition wherever it goes,” this El Camino touts an automatic transmission and a V8 engine, which pounds out 454 horsepower. The vehicle has been well maintained and is peak running order, according to the listing. As was true when it appeared on screen, the large block car still features a red finish, borrowed blue door, and primered hood.

Over the course of 96 episodes, Hickey’s El Camino served as his metaphorical horse on his road to redemption. For those unfamiliar with the show, My Name is Earl centered on Earl Hickey, a questionable character who wins the lottery and is then hit by a car. Hickey soon determines that he was hit by a car due to his past indiscretions and decides to right all the wrongs from his past.

The show, which aired on NBC from 2005-2009, won five Primetime Emmys and was nominated for nine others. The series co-starred Ethan Suplee (Randy Hickey), Jaime Pressly (Joy Turner), Eddie Steeples (Darnell “Crabman” Turney) and Nadine Velazquez (Catalina Aruca). Pressly won an Emmy for her portrayal of Joy in 2007.

Aside from My Name is Earl, the El Camino was a regular on shows like Jackass, That Seventies Show, The Cleaner, and Crossing Jordan. The vehicle has also prominently featured in countless films including White Lighting, Up in Smoke, There’s Something About Mary, Suburbia, Dazed and Confused, and Anchorman.

Mecum Auction’s celebrity car auction will be held this Friday and Saturday at the Barker Hangar at Santa Monica Airport in Santa Monica, Calif. Click HERE for more information.