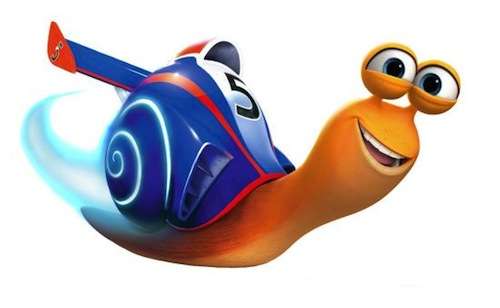 The Chevrolet brand will be plastered all over the screen when DreamWorks' upcoming animated film ‘Turbo’ hits theaters this summer.
Advertisement

Come July, Chevrolet will help an ordinary snail achieve his dream of competing in the Indianapolis 500. Sound interesting? Well, it’s all part of DreamWorks' upcoming animated film Turbo, which tells the story of a garden snail—aptly named Turbo—who receives super-speed capabilities after a chance encounter with a Chevrolet Camaro.

Designed to engage both U.S. and international fans alike, as well as add a sense of realism to the movie, the collaboration between Chevrolet and DreamWorks Animation is truly unique. Not only is an animated Chevrolet Camaro featured in the film, but the automaker has also created a one-of-a-kind real-life replica of the Camaro depicted in the film. Aside from an animated Camaro, the film prominently displays the Chevrolet logo during scenes depicting the Indy 500.

According to Chevrolet’s chief marketing officer Tim Mahoney, the brand’s partnership with DreamWorks is a win-win. In addition to being associated with one the most anticipated films of the summer, the collaboration also coincides with Chevrolet’s renewed presence at INDYCAR.

Look for the actual Chevrolet logo and its vehicles this weekend at the 97th running of the Indianapolis 500.

DreamWorks is currently filming Need for Speed, the forthcoming the live-action version of the hit video game bearing the same name. The adaptation centers on a brash street racer who escapes from prison to exact revenge on the man that framed him. The film stars Breaking Bad’s Aaron Paul, Dominic Cooper (Captain America: The First Avenger), Imogen Poots (Fright Night), and Michael Keaton (Batman). Look for Need for Speed when it hits screens March 14, 2014.