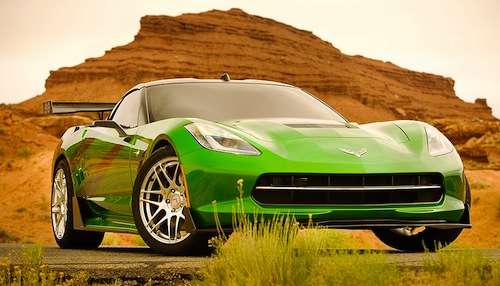 Director Michael Bay has just revealed that the all-new C7 Corvette will star as an Autobot in ‘Transformers 4.’
Advertisement

Although Michael Bay has been tight-lipped about the plot of the upcoming fourth installment of the Transformers series, the director has just posted photos of three vehicles that moviegoers can expect to see when the film is released next summer.

According to images posted on MichaelBay.com, Transformers 4’s Autobot cast will tout the likes of a custom-built Optimus Prime from Western Star (a subsidiary of Daimler Trucks North America); a $2.4 million 1,200-horsepower Bugatti Grand Sport Vitesse; and a race-inspired Chevrolet Corvette Stingray.

As evidenced by Bay’s photo, the upcoming Transformers sequel will feature a lime-green C7 Corvette equipped with a giant rear spoiler. The modified sports car is based on the 2014 Corvette production car, said Bay.

Aside from Transformers, a version of the 2014 C7 Corvette made an appearance in the popular video game Gran Turismo 5 in November 2012, as well as in TV promotions for the game in January 2013.

Though Transformers 4 will feature a custom 2014 C7 Corvette, Chevrolet’s base model is nothing to scoff at. Just yesterday, GM confirmed that the C7’s LTI V8 engine is capable of producing 460 horsepower and 465 ft-lb of torque, making it the most powerful base model in Corvette history. By comparison, the 2013 Corvette generated 430 horsepower and 424 lb-ft of torque.

Transformers 4 is set to take place four years after the events in Transformers: Dark of the Moon. Little is known plot-wise, but it has been confirmed that Mark Wahlberg (Pain and Gain), Nicola Peltz (Bates Motel), Jack Reynor (What Richard Did), Stanley Tucci (The Hunger Games), T.J. Miller (The Goodwin Games), and Kelsey Grammer (Boss) will star. Shia LaBeouf, who starred in the previous three Transformers films will not appear in the fourth installment.

Principal photography on Transformers 4 began earlier this month in Austin, Texas. Filming is currently underway at the Monument Valley Navajo Tribal Park at the Arizona/Utah border. Look for Transformers 4 when it hits theaters on June 27, 2014.