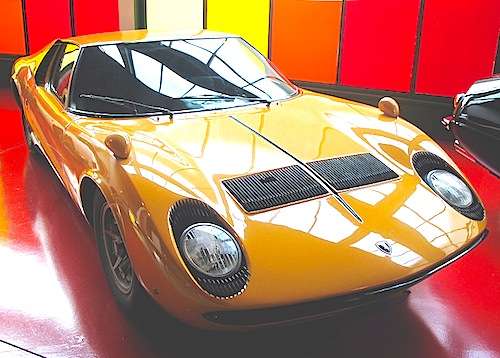 Twiggy’s Miura Is Going To Motorclassica

Twiggy’s very own Lamborghini Miura is heading out to Australia’s Motorclassica. Guess to predict how much it will go under the hammer?
Advertisement

It’s hard enough to wonder how the tiny Twiggy frame handled the testosterone Lamborghini, Miura but a Miura S. It will be interesting to see how much it will fetch. For those of you too young to remember Twiggy, she was the first superstar model born out of the swinging 1960s London hip scene. Twiggy defied the norm and defined a burgeoning hipster culture back then. And very few will even know that this tiny frame handled all of the Miura’s 370 HP from the Italian beauty.

The 60s Superstars. When you stop to consider it, both Twiggy and the Miura were the superstars of the 1960s, in their own ways. What hasn’t been said about Lamborghini’s Miura? Gorgeous, genre-defying, the original sportscar, etc? The Miura was much more than that, it was an affront to the unbeatable Ferrari in an arena where it rarely competed officially, on the streets in the hands of anyone. Twiggy on the other hand was the poster-child of the Swinging London’s mini dresses, Mini Coopers and the Beatles.

Technically Speaking. Built between 1966 to 1972, this Lamborghini is the third car the company had to offer. A few engineers worked hard on the concept, fearing Lamborghini himself would shut it down, preferring his Ferrari assault through performance sedans. Nonetheless, this was the first high performance, two-seater, mid-engined sports cars, which was at launch, the fastest production road car available. None other than Italian designer Marcello Gandini could have penned such beautiful body that hasn’t really aged some 46 years later.

Its transversely-mounted V-12 60 degree engine was made out of light-alloy with its gearbox and differential placed in an unusual way for that era. It effectively made use of as little space as possible by being designed and built in the same block and pressed-in liners mid mounted, rear wheel drive platform. With dual overhead camshafts, chain drive, two valves per cylinders, the main bearing rested on 7 bearings. The 3939 cc displacement engine had impressive numbers for its time, 370 HP at 7000 rpm with 286 lb ft torque at 5500 rpm for the S model. It’s funny to think many modern cars achieve this commonly these days. To feed of all this, the Miura relied on 4 triple-choke Weber 40 IDA 30 carburetors using 100 Octane premium gasoline, resting on a wet sump and common engine-transmission lubricant.

Ownership Questions. According to VeloceToday, the current owner, who bought the car in 1978 asked the factory inquiring about the odd paint job and its ownership history. The company acknowledged it was sold by Lamborghini to Twiggy through Lamborghini UK importers in 1969, which was confirmed by Ubaldo Sgarzi in a letter representing Automobili Lamborghini. He also explained that the car was painted lime green with orange-white stripes by the factory at Twiggy’s request, a perfect history capsule of its time. Apparently, even Lamborghini test driver Valentino Balboni confirms the stripes on the car were requested by Twiggy. The car has been upgraded with much of what made the later SV models.

If you’re lucky enough to be down under, go and check out the Motorclassica event in Melbourne, Australia on October 26-28th and tell us about it. Twiggy adds even more fame on top on an already super famous 60s supercar and we can only imagine how far this unique provenance Lamborghini Miura will fetch.