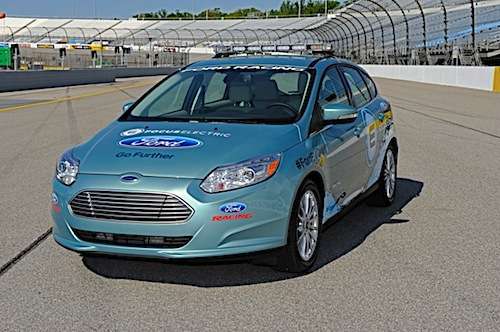 I had an interesting talk with Ford's John Viera, Global Director for Sustainability and Vehicle Environmental Matters at Ford Motor Company about the carmaker‘s strategy.
Advertisement

NZ. Ford has had the most impressive climb out of this recession, how much do you think rests on its clean energy vehicle program?

JV. Ford has and continues to invest billions of dollars in researching and developing new fuel-efficient products, engines, transmissions and electrified vehicles, EV, especially during the depths of the economic downturn. Now is when we begin to see the pay-off from those investments, especially as gas continues to increase.

People think of pure battery electric vehicles when you talk about "clean vehicles" but thanks to technologies like EcoBoost, Flex Fuel and electrification, consumers have access to a variety of vehicles that promise function and style while making driving a greener and more affordable experience.

Ford has done a lot to make its internal combustion engine as efficient as possible. EcoBoost engines deliver up to 20% better fuel economy, lower emissions and better performance versus larger engines. We expect 1.5 million EcoBoost engines 2013, making up more than 90% of North America lineup and nearly 80% of the global company market.

Ford's Electrification Strategy is to offer six new electrified vehicles in North America by end of 2012 and in Europe by 2013 with the Transit Connect Electric, the Focus Electric, the C-MAX Energi, the C-MAX Hybrid, the Fusion Energi and Fusion Hybrid.

NZ. How much of a role has William Ford had in the green push at Ford? It sounds as if he came back and pushed the company in this direction.

JV. Mr. Ford has been a lifelong environmentalist committed to develop products that please customers and benefit society. He championed the world’s first hybrid-electric sport utility vehicle, the Ford Escape Hybrid that gets 34 mpg. He made Ford become green, global and high-tech. See his TED talk here.

NZ. Ford hasn't trumpeted its EV as loudly as others, but has instead shown a coherent and intelligent array of fuel-efficient cars, electric and hybrid. What was the catalyst?

JV. We believe in "Power of Choice", offering a range of fuel-efficient vehicles and technologies is the best way to meet the various needs of our customers, while reducing CO2. By giving the Focus the same body style in gas or electric version, it gives us the ability to be flexible. As demand rises for EVs, we adapt quickly. The Power of Choice is based on three pillars: 1) Consumer Choice, 2) Technology & Innovation and 3) Reduced Costs & Environmental Impact.

NZ I met with some incredible women engineers at Ford who really impressed me. Do you feel this sets you apart form other makers?

We're fortunate to have some extraordinary women at Ford and recognize the value they bring to all aspects of vehicle design. We were named this year one of America’s top corporations for its support of women-owned suppliers, the first time an automaker has earned the award.

It's important to understand how valuable a woman’s input and insight is in creating vehicles clients want. Women are directly responsible for 45 to 50% of all new vehicles purchased in the U.S. with a direct influence on up to 80% of vehicles they don’t purchase themselves and account for $85 billion. Empowering smart women is our way of connecting to an underrepresented part of the marketplace and help design car people feel good owning. Our biomaterials team is an all-woman, all-mother team responsible for greening our vehicle interiors.

NZ. The user EV experience has been well thought out at Ford. How do you see it evolving in the near future for drivers and potential owners?

JV. We expect 10 to 25% of Ford’s global sales to be EVs, HEVs and PHEVs by 2020. The idea to create a uniform platform where vehicles like the Fusion can use an EcoBoost engine, a hybrid powertrain, or a plug-in hybrid options, reduces costs, ensures top quality and gives our Power of Choice.

Ford’s climb out of this recession is certainly impressive and the improvements it has made in almost all aspect of the industry are starting to bare its fruits. Quality has gone up, choice is more varied and the cars are overall much more fun to drive, while lowering consumption and emission. Ford’s strategy has paid off so far and it’s varied choice of electric cars, hybrids and plug-in hybrids are finally bringing something that has been missing these last few decades, choice.