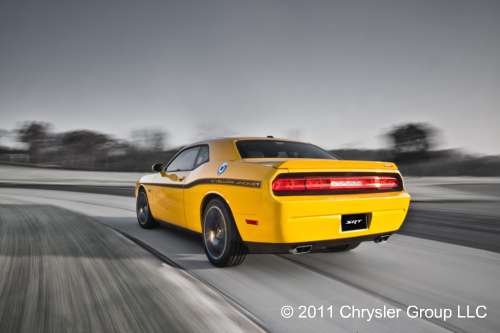 Fans of Dodge and Chrysler’s high performance vehicles will want to have their televisions tuned into the Speed Channel at noon on Sunday, December 18, for the first showing of an episode of Test Drive featuring the 2012 SRT lineup. That would be the Jeep Grand Cherokee SRT8, the Chrysler 300 SRT8, the Dodge Charger SRT8, and the Dodge Challenger SRT8 392. Champion road racer and host Tommy Kendall will be teaming up with his special guests to give us a look at what the 2012 SRTs can do. Each of the vehicles will get its own segment of the 60-minute show.

One of the special guests is Ralph Gilles, the president and CEO of SRT and Motorsports, who seems to love getting behind the wheel of Chrysler’s vehicles, even to the extent of competing in the Targa Newfoundland. "Viewers will be impressed as our new SRT vehicles are the real stars of this show," Gilles said. "Working with a champion driver and true enthusiast like Tommy Kendall along with the team at Speed is always a blast; I can't wait to see the premiere." He and Kendall grab a Chrysler 300 SRT8 for a spin around Detroit, both on the highway and on the track.

You’d expect the Jeep Grand Cherokee SRT8 to be shown off-roading. Instead, it’s taken for a drive through the German countryside and then put through its paces on the Nurburgring Nordschleife. High performance, indeed.

Host Kendall joins race car driver Kurt Busch at the Carolina Motorsports Park, where they take a pair of Dodge Charger SRT8s on to the track. Finally, he meets motocross athlete and racing team owner Carey Hart in Fontana, California, to put a couple of Dodge Challenger SRT8s through a movie chase scene. Sounds like a lot of fun. How do I get a job like that?

If you’re interested in your own SRT experience, you might want to check out the SRT Track Experience, a full day of instruction for SRT owners and enthusiasts presented at various venues across the United States. Instructors from the Richard Petty Driving Experience take participants through four different modules: driving dynamics, autocross challenge, head to head challenge, and performance drive. The day finishes with hot laps. Owners of SRT vehicles may have had the registration fee included in the price of their vehicle. For everyone else there’s a $500 charge. It’s possible to buy gift cards if there’s a very special Chrysler fan in your life.