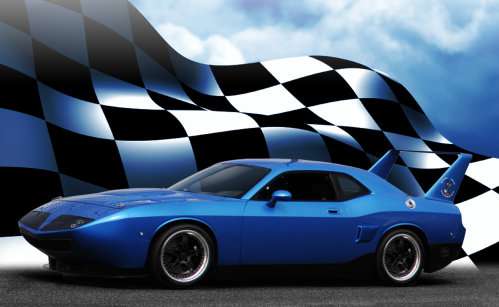 During Richard Petty’s incredible racing career, he competed in a great many different makes and models of race cars but few stand out more than his legendary Plymouth Superbird and thanks to help from the folks at Heide Performance Products, Petty’s Garage is offering a modern, high performance Superbird based on the new Dodge Challenger.
Advertisement

Heide Performance Products unveiled their modern Challenger-based dodge Daytona at the 2009 SEMA Show with an aerodynamic (and great looking) front end, high performance engines upgrades and a massive rear wing similar to the one that gave the 1969 and 1970 Chrysler Corporation “wing cars” their nicknames. Shortly after, HPP came up with a slightly different version wearing the now-gone Plymouth brand and the Superbird name, but still sporting the sexy body upgrades and performance options of the original HPP Daytona. For 2008+ Dodge Challenger owners, HPP offers a chance to turn your Mopar muscle car into a unique supercar, packing 600 horsepower and an aerodynamic body (with modifications that extend well beyond the front fascia and rear wing) that will turn heads as it roars by.

The Petty’s Garage Signature Series Superbird (or Daytona) begins with the 2011 Dodge Challenger in R/T or SRT8 form as well as some pre-approved 2010 Challengers, adding Heide Performance Products’ sleek front “nose” with hide-away headlights and the large rear wing that really makes this car scream “Superbird”. The exterior then gets a heavy compliment of Petty badges inside and out, with The King’s signature found on the custom 200mph speedometer.

Next, Petty’s Garage adds their own adjustable coilover suspension package complete with larger front and rear adjustable anti-roll bars manufactured by the handling gurus at Pedders Suspension. Next, a massive Brembo brake package is added to the front and rear of the Petty Superbird, tucked behind unique 20” Forgeline wheels wrapped in Pirelli P-Zero performance tires. Front and rear shock tower braces finish off the handling modifications and in standard form, the other performance components are a Hurst short-throw shifter, a Borla cat-back exhaust system and a cold air intake system.

However, if you want your modern Dodge Challenger to not just look like the Plymouth Superbird but also perform like it (or better), the Petty’s Garage Superbird offers a handful of “Petty Preferred Options”. These begin with a handful of Petty Power/Magnuson supercharger packages for the 5.7L, 6.1L and 6.4L Hemi engines that produce outputs ranging from 600 to 800 horsepower, depending on the engine in your Challenger. Challenger R/T owners can only pick the 600hp package, but SRT8 owners can select from the 600, 725 or 800 horsepower packages. If you are a little more of a purist and want a naturally aspirated Petty Superbird with a 426 cubic inch Hemi, Petty’s Garage and Arrington Performance can convert your stock 6.1 engine into a 426 Hemi, packing 585 horsepower.

To handle the added power of the Petty Preferred engine options, the option list for the new Petty Superbird includes high performance axles, a high performance driveshaft, and a Petty’s Garage control arm and rear subframe upgrade. If you want to add a little more style to your Petty Superbird (or Daytona), you can opt for more body upgrades from Heide Performance Products in the form of a set of vintage-looking fender scoops or a hood bulge.

The price of the new Petty Superbird begins at $36,900, not including the cost of the 2010 or 2011 Dodge Challenger R/T or SRT8 donor car needed for the build. This also doesn’t include the high performance engine upgrades but if you are interested in turning your new Dodge Challenger into a modern Plymouth Superbird, contact the Petty’s Garage soon, as only 25 total vehicles (Superbirds and Daytona’s combined) will be produced for the 2011 year. Click here for more information on the Petty’s Garage Signature Series Superbird and Daytona and click here for a look at the HPP Dodge Daytona from the Heide Performance Products website!