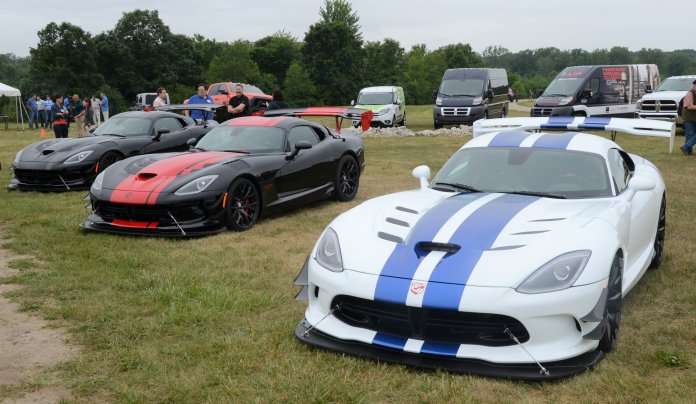 Dodge Viper Production has Officially Ended - Why and What's Next

The very last Dodge Viper rolled off of the Connor Avenue assembly line last month, ending the 5th chapter in the book of the Viper and leaving many people wondering what the future holds for the Dodge supercar program – and why the Viper was killed off to begin with.
Advertisement

On August 16th, 2017, a red 2017 Dodge Viper rolled off of the assembly line at the FCA Connor Avenue Assembly Plant and when it did, the assembly line which had built most of the Vipers over the past 25 years powered down for the final time. With that final 2017 Viper, production of the Dodge supercar has come to an end and some believe that it is gone forever, although there are still plenty of Vipers on dealership lots around the United States.

FCA makes it sound like the Dodge Viper is gone forever, but I am skeptical about that, so today I take a look at why the Dodge Viper was once again killed off and what the future could hold for the Mopar supercar program.

Why the Viper Died, Again
The 5th generation of the Dodge Viper was introduced for the 2013 model year as the SRT Viper, arriving after a 2 year hiatus from the company lineup. The Viper was last built until 2010, so when the 2013 Viper was introduced, it was met with huge fanfare. The Mopar world was ecstatic to see the return of the fabled supercar, but during the course of the 5-year production run, sales fell short of expectations. Even when the company lowered prices, Viper sales picked up a bit, but they were never able to sustain the kind of numbers that the company had expected, so the 2017 was announced as the final model year for this Viper.

There will be no 2018 Viper, but why? I think that it comes down to the price and performance of the Viper relative to the competition – mainly the Chevrolet Corvette.

When the Dodge Viper was introduced in the early 1990s, it was a cutting edge American supercar with stunning performance capabilities. The 1st gen Viper’s V10 engine offered 400 horsepower and 465lb-ft of torque while running the quarter mile in 12 seconds flat. For comparison, the next closest American car was, of course, the Chevrolet Corvette, which offered just 300 horsepower and 330lb-ft of torque in “base” trim while the Corvette ZR1 offered 375hp and 370lb-ft of torque – turning in a quarter mile time in the low 13 second range.

In short, the 1st gen Dodge Viper would comfortably beat any Chevrolet Corvette from the same model year, and that was true year after year and generation after generation until the C6 Corvette ZR1 was introduced with 638 horsepower (while the Viper “only” had 600hp). However, even as the Viper was less powerful than the ZR1, the Viper ACR routinely took the supercharged Vette to task on road courses all over the world.

Even with the success of the 4th generation Viper, the car was discontinued after 2010 as the company worked on a spicier Viper. That car would arrive in the form of the 5th generation, 2013 SRT Viper.

The “new” Viper back in 2013 still had a V10 engine, but with 645 horsepower and 600lb-ft of torque, it was once again the most powerful American supercar, edging out the C6 ZR1. The only problem was that the 5th gen Viper was far more expensive, so although it was far more refined and more comfortable for daily driving, the 2013 SRT Viper wasn’t a whole lot quicker than the C6 ZR1. More importantly, when the C7 Corvette Stingray with 460hp was introduced, it was found to come very close to the Viper on some tracks and when the C6 Corvette Z06 was introduced with 650 horsepower – the Viper was once again overshadowed by the Vette.

The introduction of the newest Viper ACR allowed Dodge to set track lap records all over North America, but the Viper offered only slightly better performance than the Corvette Z06 while costing a fair deal more. The Viper still offered great branding attention, but when the Dodge Hellcat Challenger and Charger were introduced for the 2015 model year, the Viper wasn’t even the most talked-about Dodge.

In other words, after the Viper was introduced as an unrivaled, earth-shattering performance car in the 1990s, the 5th generation car simply didn’t stand out above the competition and as dream cars go, it was more or less replaced by the Hellcat cars. This meant that Mopar faithful bought the newest Viper, but it didn’t offer the performance needed to get other supercar owners to make the jump to Dodge and it didn’t offer the branding impact that Dodge gets with the Hellcat cars. As a result, sales of the 5th gen car were relatively low every year and as such, the company made the choice to once again remove it from the lineup.

Finally, the most critically, there are new safety standards which require cars to have side impact airbags and the structure of the Viper cannot fit or support those features, so without considerable changes, the Viper is literally no longer allowed to be sold by the company until the extra airbags are added. Even if the Viper had sold well this year, these safety restrictions would have brought an end to this generation of the Viper.

The Future of the Viper
While FCA has more or less said that the Dodge Viper is dead and gone, I don’t believe that we have seen the last ever Viper. Even if the Connor Ave plant is sold, I believe that we will see another Dodge supercar in the future and when it comes – it will stand apart from the Corvette and the rest of the American performance cars, just like the original Viper did back in the early 90s.

In the meantime, the Dodge Viper has once again left the company lineup, leaving the Dodge Hellcat cars to serve as the pinnacle performance models and the key dream cars for marketing purposes.

Polara wrote on October 2, 2017 - 1:22pm Permalink
With the AWD Trackhawk and a 707hp hemi could a hellcat powered awd Viper be in the works?
Kody Sandberg wrote on December 21, 2018 - 9:16am Permalink
nonononono i want the viper
V8 EATR wrote on February 28, 2019 - 4:21pm Permalink
The Viper better be coming back. That car is the best, even though performance was lower than that of the Hellcats', it has a much better look.

Tesla Contemplates A New Strategy for China Retail even As Sales Boom
Jay Leno on Elon Musk & EVs: “I Think He Should Get ... Credit"
END_OF_DOCUMENT_TOKEN_TO_BE_REPLACED