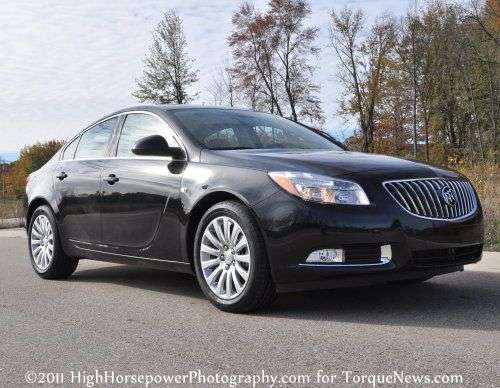 The 2011 NCAA Men’s College Basketball tournament begins tonight and as the top 64 teams set off to figure out who is #1, the Buick brand will feature the new Regal and LaCrosse through commercials and branding efforts during the extensive television coverage.
Advertisement

Buick has signed on with the NCAA not just for men’s hoops, but across the championship processes behind 26 NCAA championships throughout the college year to promote their “Buick Human Highlight Reel” program. This announcement comes just after General Motors announced the Buick Achievers Scholarship Program - providing up to $4.5 annually in scholarship funds to 1,100 college-bound students nationwide.

Will Funk, senior vice president of NCAA Partnerships and Branded Programming within Turner Sports Ad Sales had this to say about the new partnership between the NCAA and the Buick brand:
“Through this partnership, Buick will have the ability to create year-round branded content, distributed on multiple NCAA media platforms including NCAA.com, around all 26 NCAA Championship sports.”

NCAA director of championships and alliances Peter Davis offered this comment about the new programs between the governing body of college sports and the reborn Buick brand:
“The Buick Human Highlight Reel shows the continued leadership and dedication that student-athletes have once they complete their academic programs and become active in their communities or involved with broad initiatives that have a positive influence on the lives of others.”

Along with assisting students in the high costs of college and promoting these young athletes, Buick hopes to use these partnership to bring awareness to the new lineup that they plan to use in order to remove the elderly reputation. Having had the pleasure of driving the new LaCrosse and Regal, I can tell you that these are not your grandfather’s boring gold Regal sedan of the 1990s. The new Buicks are luxury cars minus the price, with enough power to offer some fun-to-drive factor and Buick hopes that the younger crowd of the 2011 NCAA Men’s Basketball tournament will bring some younger awareness and interest to the brand.

According to Strategic Vision Inc. of San Diego, the average age of a new Buick driver dropped from 70 in 2009 to 67 in 2010 and while they are headed in the right direction, GM wants to continue bringing that number down. The 2011 NCAA March Madness will be one of the most-watched series of programs over the course of a few weeks, with fans of all ages – but with a clearly lower age appeal thanks to the college crowds – and Buick hopes to capitalize on that with their television campaign along with their charitable programs with the NCAA.

Other recent news:
US auto industry hit by supplier shortages in wake of Japanese Tsunami
GM donates $750,000 to Japanese earthquake relief efforts
Nissan updates the world on their post-earthquake status
Toyota update on damage done by the Japanese earthquake
Honda issues a statement on damages caused by the earthquake and tsunami